For many genes, timing of transcriptional activity is regulated by epigenetics. One mechanisms behind this, promoter proximal pausing, involves positioning the RNA Polymerase II at specific sites in the genome so genes can be turned on­–or expressed­–rapidly in response to developmental cues. Recent research shows that the NELF complex stabilizes promoter proximal pausing during muscle re-generation.

Satellite cells are a population of adult stem cells whose main function is to repair damaged muscle tissues. These cells remain in a quiescent (or “dormant”) state prior to muscle injuries. In this state the satellite cells do not generate new cells and their population numbers remain static.

When injuries to muscles occur, satellite cells are activated, re-entering the proliferative (or multiplying) state as myoblasts to generate enough cells to repair the damaged tissue. The myoblasts continue to proliferate to expand their population until molecular signals provided by the regenerating muscle tell them to stop.

As myoblasts exit the proliferative state, epigenetic mechanisms determine what will happen next. They will either 1) return to the quiescent state to maintain stem cells for future injuries; or 2) fuse together and form new muscle fibers in a process known as terminal differentiation. One of the epigenetic mechanisms involved in this process is promoter proximal pausing. 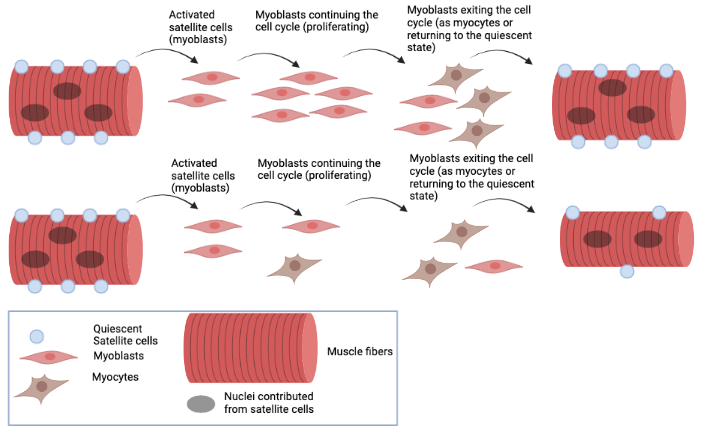 At many genes, transcription starts but is quickly stopped. RNA Polymerase II– an enzyme responsible for copying a DNA sequence into an RNA sequence–remains in a paused state awaiting further cues to begin the full elongation. This pausing allows for rapid turning on of genes when they are needed. However, the advantage of being able to turn on a gene quickly comes with the downside that the short mRNA attached to the paused RNA Polymerase II is easily degraded if it is not protected.

A key protein complex involved in stabilizing promoter proximal pausing is the Negative Elongation Factor complex (NELF) which acts to protect the short mRNA attached to the paused RNA Polymerase II. While NELF-dependent promoter proximal pausing of RNA Polymerase II is a well-known process for regulating gene expression, it is not clear how muscle stem cells adopt this mechanism to control muscle repair.

The NELF complex regulates the proliferative potential of myoblasts

When the NELF-b gene was eliminated in a study performed by the Dilworth lab, the ability of myoblasts to proliferate was impaired. Instead of greatly expanding the number of cells in the population, an unusually high proportion of myoblasts were pushed into terminal differentiation during each round of cell division.

Genes required for proliferation showed reduced expression levels as the RNA Polymerase II was more likely to dissociate from the genes in the absence of the NELF complex. This included two key genes of the p53 cell cycle regulatory pathway -  SerpinF1 and Ccng1 - which were downregulated.

This p53 protein prevents proliferation of myoblasts. Instead, the cells are forced into terminal differentiation. Although these myoblasts become muscle cells, reduced replication of the myoblasts results in the formation of less muscle overall.

Over-commitment to terminal differentiation in myoblasts lacking NELF can have a significant impact on muscle regeneration over an organism’s lifespan. In normal conditions, healthy myoblasts proliferate until they have more than enough myoblasts to fully repair the damaged muscle. The remaining unused myoblasts then return to a quiescent state to keep stem cells for repairing future muscle damage. However, when disease prevents good proliferation of myoblasts, too few regenerative cells are present to properly repair the muscle. In these conditions, the myoblasts must all be allocated to repairing the muscle, leaving significantly fewer cells available to re-establish the stem cell population, highlighting the need for the precise epigenetic regulation in this process.

This study has shown that the epigenetic regulation of transcriptional timing in satellite cells is essential for proper regeneration of muscle. One of the epigenetic mechanisms which regulates this activity is the NELF complex, which allows transcription to be temporarily halted through proximal promoter pausing so that target genes can be rapidly expressed in the event of an injury.

This review paper from the lab of Dr. Lis describes the evidence of promoter-proximal pausing as well as some known and speculative roles of the process.

This review paper from the Dr. Adelman lab describes the process of promoter-proximal pausing in finer detail.