Epithelial to mesenchymal transition (EMT) is at the heart of cancer metastasis. Abnormal histone post-translational modifications affect expression of key EMT marker genes, potentiating this process. This article briefly introduces metastasis and EMT and describes how epigenetics plays a role in cancer progression. 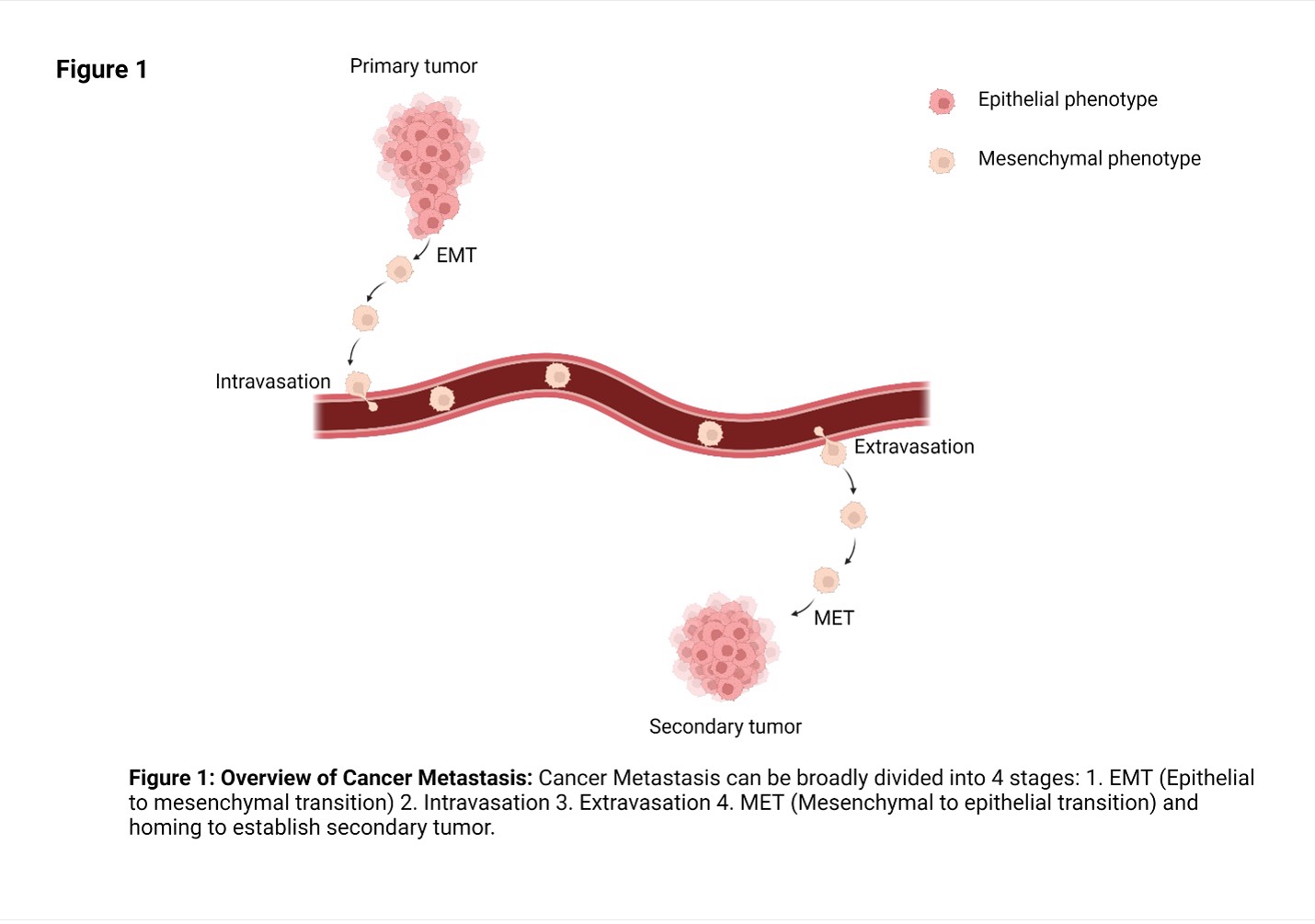 Metastasis can be broadly divided into the following steps:

1. A group of abnormal cells are found at the primary tumor site which have not yet invaded the surrounding tissue. This condition is called carcinoma in situ.
2. Some cancer cells in the primary tumor acquire invasive and migratory phenotype. One centrally important process for acquiring such phenotype is the cell biological process called epithelial to mesenchymal transition (EMT).
3. Migratory cancer cells enter the circulation through blood or lymph vessels.
4. Migratory cancer cells exit blood/lymph vessels by extravasation through vascular walls at a distant tissue or secondary site.
5. At the secondary site, cancer cells reacquire their original nonmigratory phenotype through mesenchymal to epithelial (MET) transition and establish microscopic colonies.
6. Microscopic colonies proliferate to form clinically detectable metastatic lesions.

EMT is a normal biological process that occurs during embryogenesis, inflammation, wound healing and fibrosis. For example, during embryonic development, EMT is required for the establishment of the germ layers endoderm, mesoderm, and ectoderm.

EMT is induced by a range of factors including hypoxia, cytokine, growth factors, immune responses to the tumor and anticancer drug treatment. Due to EMT, some cancer cells in the primary tumor lose cell-cell or cell-basement membrane adhesions and undergo cytoskeletal reorganization.The cells transition from an epithelial phenotype to hybrid epithelial-mesenchymal or mesenchymal phenotype. These cells can migrate out of the primary tumor. 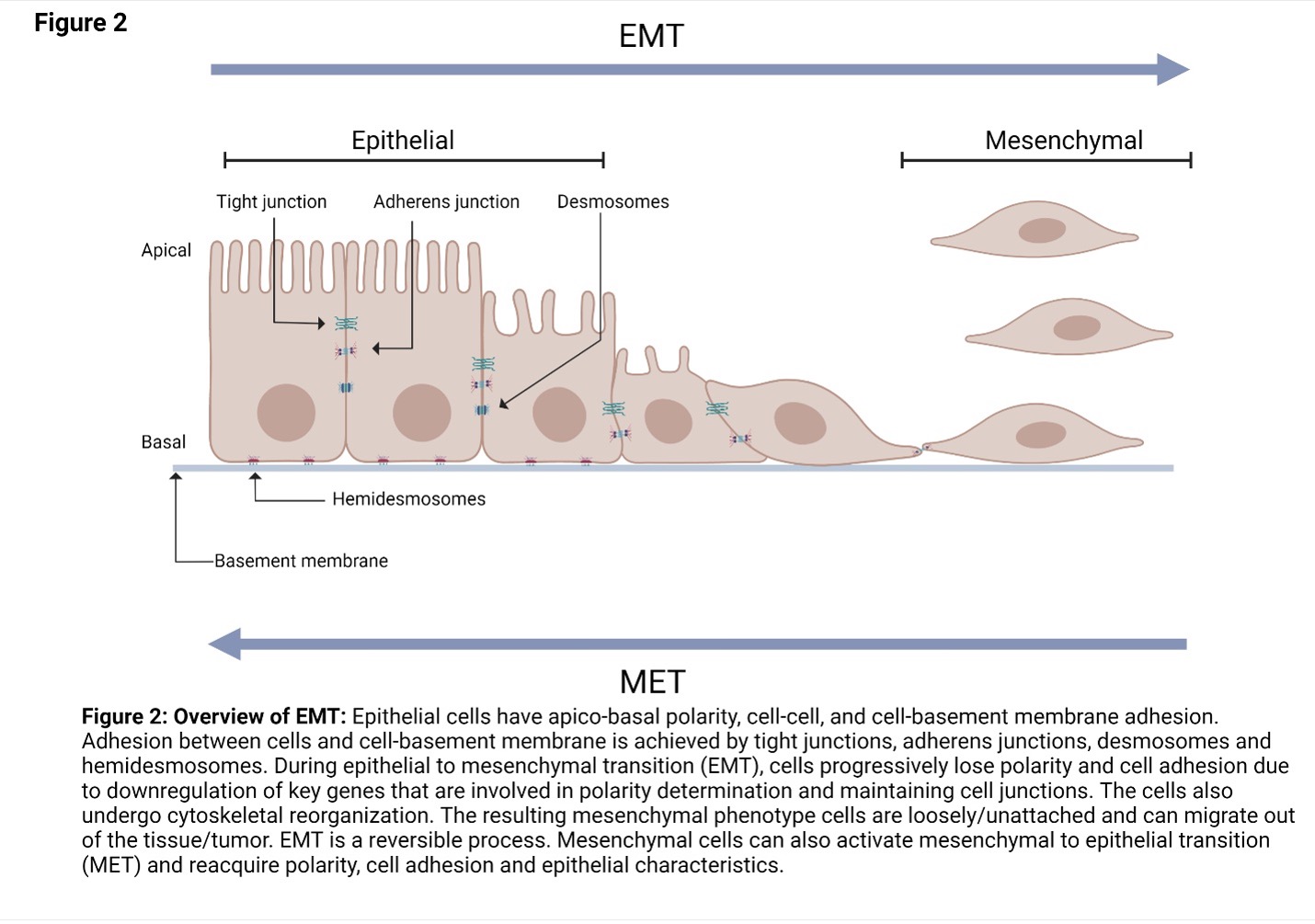 The migratory metastatic cells next invade the nearest lymph or blood vessel and gain access to circulation by a process called intravasation. Intravasation involves complex interactions between the cancer cells and the vascular endothelial cells.

Malignant cells in circulation are carried to the secondary sites of metastasis. At the secondary site, the cancer cells exit from the blood/lymph vessel by interacting with endothelial cells and this process is called extravasation (Figure 4).

Cells that have extravasated undergo mesenchymal to epithelial transition (MET). During MET, the cells re-acquire epithelial phenotype. Cell-adhesions are re-established, and a secondary tumor is formed from the metastatic cells. This ‘homing’ process is highly specific and depends also on the tissue microenvironment.

Histones are proteins that play a role in packaging DNA into chromatin. In the nucleus of cells, DNA is wrapped around an octamer of histones composed of 2 copies each of histones H2A, H2B, H3 and H416 (Figure 4). The composition of the octamer is not set in stone, and H2A, H2B, H3 and H4 are sometimes replaced by histone variants.

The histone proteins have multiple residues mainly on the N-terminal tail region that can be post translationally modified (Figure 3). Importantly, post-translational modification of the histone and the residue can have varying consequences including changes in the accessibility of DNA to transcription machinery. Since this can affect gene expression, enzymes responsible for histone modifications are tightly controlled. Aberrant expression of these enzymes are linked to many diseases including cancer. 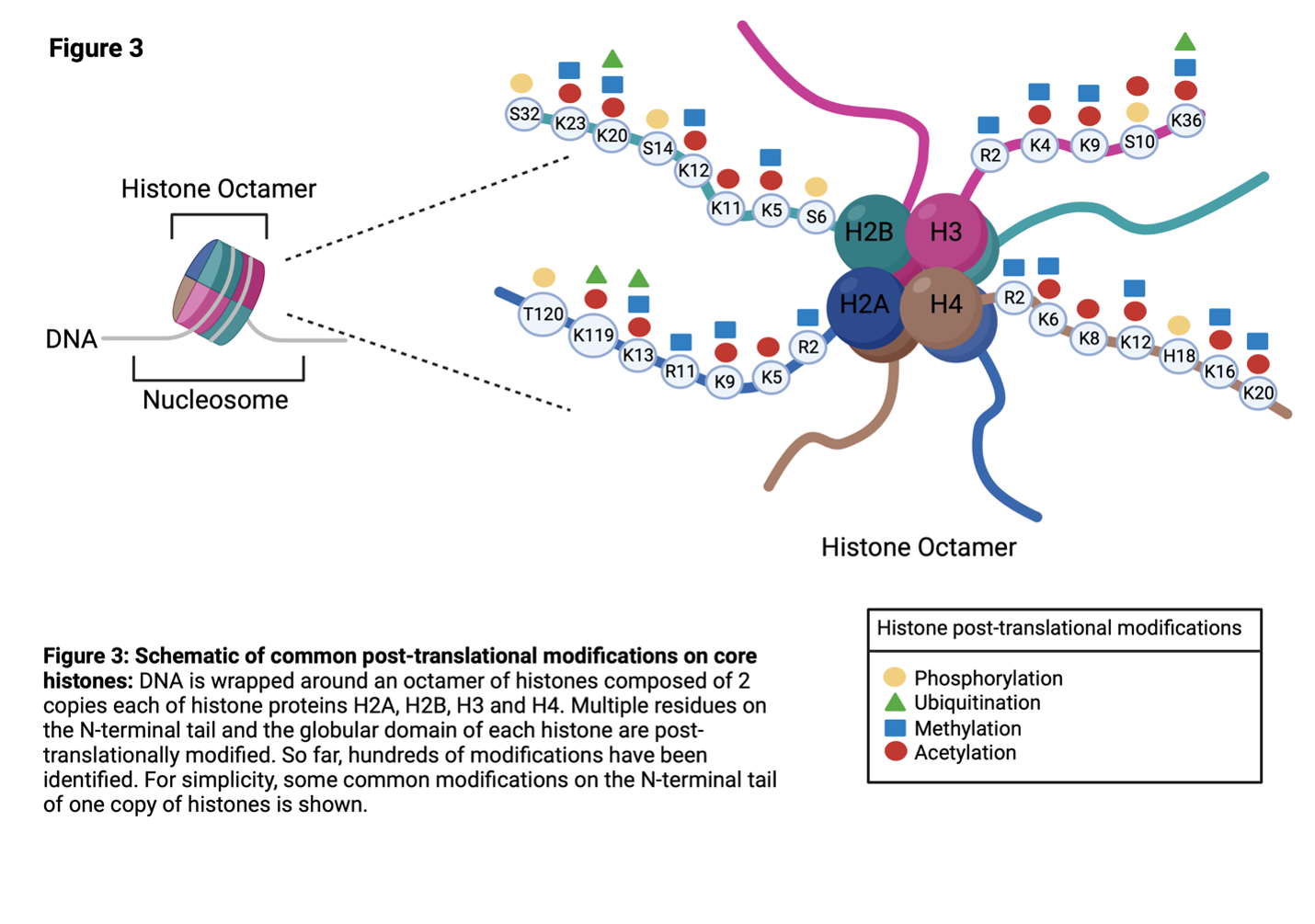 The main way histone modifications play a role in regulating EMT is by activation of epithelial gene expression and/or repression of genes responsible for mesenchymal-like phenotype. In metastasising cancers, these regulations are attenuated. Epigenetic research has led to a better understanding of the specific genes involved in this process. 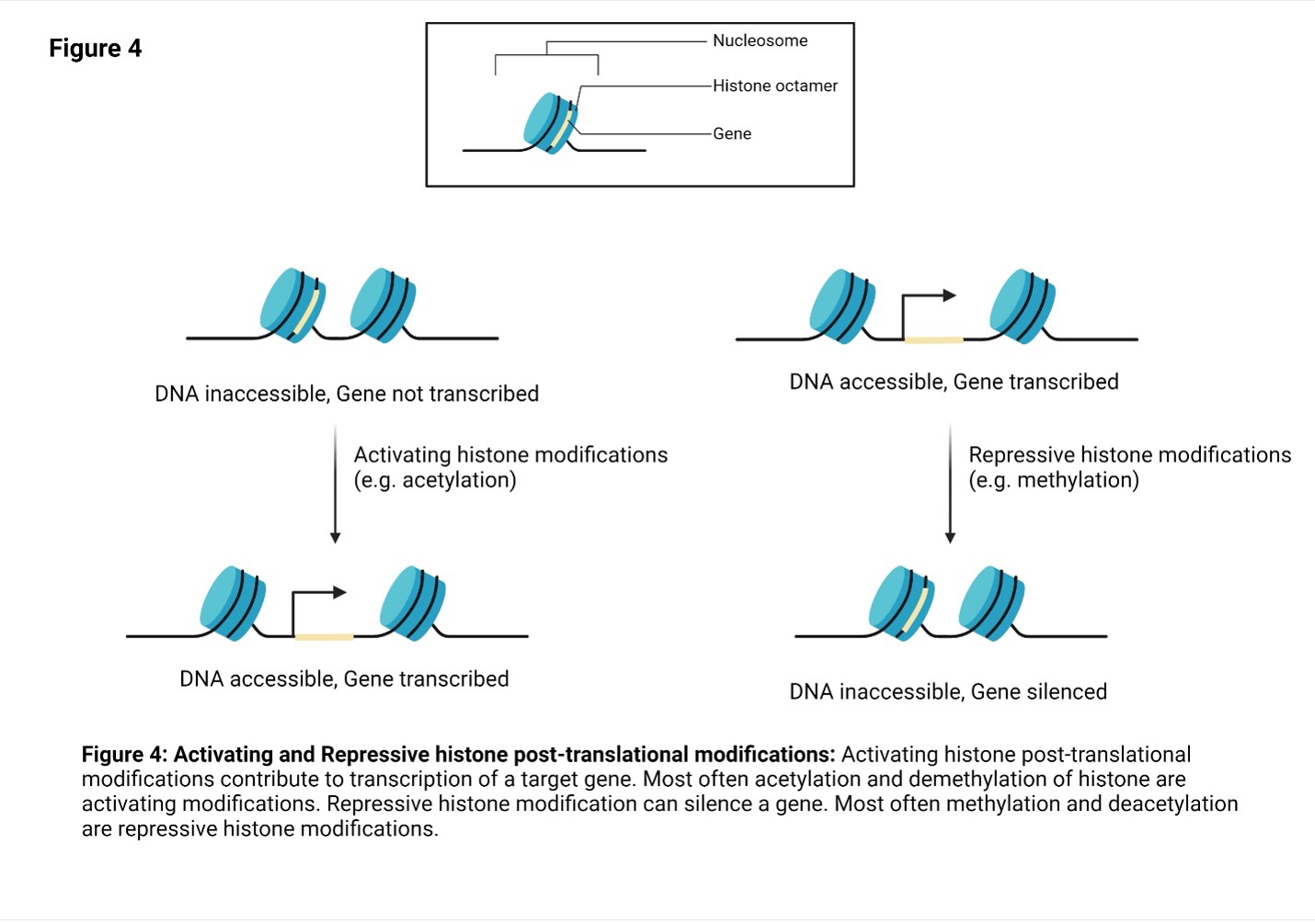 Snail (SNAI1) and Slug (SNAI2) are two major transcription factors that promote EMT in both development and cancer contexts. The growth factor TGF-beta has been shown to be highly expressed in metastatic breast cancer. It has been shown that, Snail/Slug overexpression leads to enrichment of activating histone modification-histone 3 lysine 9 acetylation at the promoter of TGF-beta pathway protein TGF beta receptor 2 (TGFBR2) leading to overexpression of TGFBR223. Histone acetyl transferase hMOF has been shown to maintain expression of genes required for epithelial phenotype, such as TMS1, CDH1 and ESR1, by acetylation of histone 4 lysine 16 at the promoter. In some breast cancer and medulloblastoma, hMOF is down regulated.

EZH2 is a histone methyltransferase which silences genes by methylation of histone 3 lysine 27 at the promoter. In several cancers, EZH2 is overexpressed resulting in silencing of genes such as CDH1, AXIN2, NKD1, PP2R2B, which are required for either maintaining epithelial phenotype or controlling EMT inducers. When these genes are silenced, the cells undergo EMT, and the cancer becomes metastatic.

Snail (SNAI1) which is the master inducer of EMT has been found to recruit histone methyltransferase G9a to deposit repressive histone 3 lysine 9 methylation marks on the promoter of epithelial marker gene CDH1.

Metastasis is a well-known factor associated with a worse prognosis in cancer. Malignant cells become metastatic by exploiting several biological processes, one of which is EMT. In many cancers, aberrations in histone post-translational modification leads to altered expression of key EMT genes, which increases the metastatic potential of malignant cells. Continuing research into both the process and the genes involved in histone modifications that lead to metastatic cancer has great potential to improve diagnosis and treatment.

We would like to thank Dr. Linda Penn and Dr. Mohammadi Gharrari from Princess Margaret Cancer Centre for providing expert review of this article. Thank you also to Elizabeth Elder for providing the French translation.